The History of Kite Boarding

Chinese philosophers Mozi and Lu Ban invented the kite in the fifth century BC. Some years later, the Chinese had developed kites enough for man to fly. According to the Book of Sui, the Chinese tyrant emperor Gao Yang executed prisoners by making them fly with bird-shaped kite wings somewhere between 550 and 559 BC. I'm guessing these kite-flying attempts were not meant to successfully return the pilot. It would take many centuries for a sport to develop from these inauspicious beginnings.

Polynesians were documented surfing by Westerners in 1767 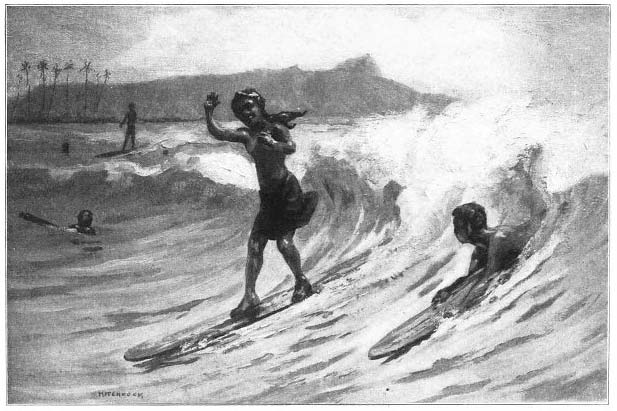 1779 depiction of surfing in Hawaii

Back in the the 1800's, before kiteboards and mountain boards, there was the kite buggy. No, I'm not talking about one of Peter Lynn's kite buggies. I'm talking about an eccentric named George Pocock and his horse drawn carriage, the "charvolant":
http://en.wikipedia.org/wiki/George_Pocock_%28inventor%29 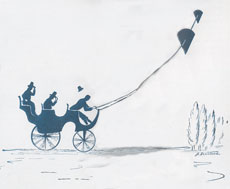 Kite Bugging was first documented in the 1800s

Samuel Franklin Cody created man-lifting kites for the military that did return the pilots alive. His kites were used during the 1902 Second Boer War to spot enemy troops. Cody also sailed across the English Channel in 1903 using a boat pulled by a kite.

Video of Duke Kahanamoku riding waves in the 1930's

John Mellor captures the Duke surfing a wave in Waikiki at the 1:20 mark.  Duke became famous after winning gold medals in the 1912 and 1916 Olympics. He introduced Hawaiian culture and surfing to the world.
The earliest footage of Stand Up Paddling that I have ever seen is at the 2:43 mark.

These people used a boat and a kite to pull a person up into the air, "skiing the skyways."

In October of 1977, Gijsbertus Adrianus Panhuise of Netherlands was granted Patent NL7603691 (A) - 1977-10-11, "Samenstel voor het beoefenen van watersport" which translates to structure for practicing water sports. A month later, Never Mind the Bollocks, Here's the Sex Pistols is released in November 1977. Coincidence? No. Synchronicity. What else are you going to listen to when you find yourself strapped to a trapeze-like harness attached to something like a parachute that pulls you along while you are on a surfboard-like device? "I got no reason/it's all too much/you'll always find us/out to lunch"- words a kite surfer could live by.  I have to go now.  I just got a wind alert on my mobile app... 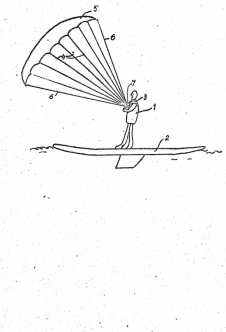 In 1977 Panhise's concept of kite boarding was granted a patent.

With Dave Culp's invention of the inflatable leading edge kite in 1978, came the ability to launch or relaunch a kite from the water. Several years later in 1982, he made the first bidirectional kiteboard. Kiteboarders are indebted to him for these two inventions.

Brothers Bruno and Dominique Legaignoux designed inflatable kites in 1985 that would create the sport we know as kiteboarding. They came to Maui and became business partners with Niel Pryde. Together they released a kite brand named Wipika. From Wipika came Airush, Naish and Cabrihna. To read an excellent article on the Legaignoux brothers and the birth of kiteboarding click here.

1992 Cory Roeseler and the Kite Ski

In 1992 Cory and his dad's company, KiteSki, received a patent for a board, kite and bar combo.  He would stand onshore and use a reel on his bar to feed the kite out--self launch.

Manu Betrin Brings an Inflatable Kite to Maui in 1997

The following article is another good read on the birth of our modern sport:
http://www.airush.com/2014/history/

This first "World Competition" of Kite Boarding was held on Maui, Hawaii.  There were 22 competitors.  Marcus "Flash" Austin was the overall winner.  Cory Roeseler placed second using his KiteSki.  Robby Naish won the slalom event.  The first female champion of the sport was Tomoko Okazaki.

Red Bull made a movie about the beginning of the kite boarding sport.  The DVD was included inside of a kite magazine.

Kite boarding has developed into something amazing.  These following videos show where some people have taken the sport:
UA-42618690-1